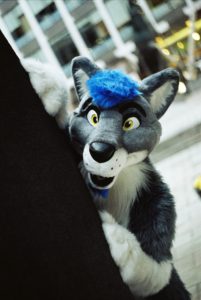 Our first Guest of Honour for 2017 is Volf. He hails from Ayesbury in central Buckinghamshire, his home for all his life.

He first encountered the fandom while researching for an art project, a long fan of wolves he stumbled onto Brokken T Wolf’s website, saw his fursuit and got hooked! After his first few visits to London meets, his interest in fursuits and fursuiting grew and grew, and the rest is history!

Volf spends a great deal of time fundraising in fursuit for a variety of local and important charities, his love of fursuiting has helped him raise over £40,000 for a range of causes and he has no aims of stopping any time soon! 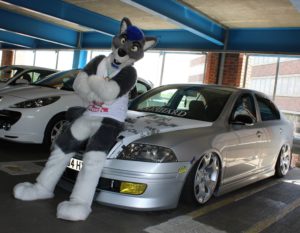 When he isn’t in fursuit, (and that isn’t often!) Volf enjoys drawing, preferring a robotic and mechanical style in contrast to his usual cuddly fluffiness, he also likes dancing to bass-heavy music and being elbow deep in his car, cleaning, repairing or improving whatever he can find.

You can find out more about Volf at: FurAffinity

Our second Guest of Honour is Shay from The Netherlands. 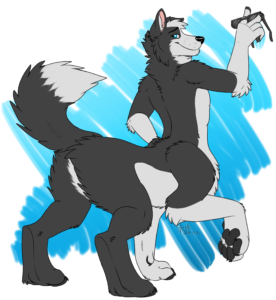 mal! Ever since he has devoted himself to being creative and entertaining as well as travelling the world to meet new friends and do fun projects.

Shay spends most of his time when he isn’t in fursuit writing, directing and voice acting, most notably all three in Bitter Lake and as the voice of Spikey Wolf, mascot of EF Prime.

He will also be familiar to a few of you as an attendee and feels incredibly humbled by his Guest of Honour appointment, (you can be sure to find him bouncing around in suit and generally being a fluffy ball of energy around the con!

You can find more about Shay at: FurAffinity